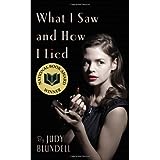 What  I Saw and How I Lied

by Judy Blundell
Evie is excited when her stepfather, Joe, returns home from World War II.  It is 1947 and Evie and her beautiful mother, Bev, have been living with Joe’s mother while he was in the army. Now that he is home, the family is trying to get back to normal. Suddenly Joe decides that they should leave Brooklyn and head to Florida for a vacation, even though it is the off season and most of the hotels are closed. Once there, they meet Arlene and Tom Grayson who are staying at their hotel. They convince Joe and Bev to come in with them on a possibly shady business deal. Arlene lavishes attention on fifteen year old Evie by taking her shopping and helping her develop a sense of style. Evie is desperate to grow up but her overly protective mother doesn’t seem to want her to grow up. When twenty-three year old Peter, an army buddy of Joe’s, shows up at the hotel, Evie is smitten with his good looks and charm. However, Joe isn’t happy to see him. Will Peter reveal secrets that Joe doesn’t want revealed?  Peter’s appearance at the hotel is no accident and what happens will change their lives, forever. As a hurricane descends on them, there is a murder, or was it murder?
This coming of age story has lies, betrayals, courtroom drama and a mystery with twists and turns. There is a lot going on in this book and the author deftly weaves the plot threads together.  Evie is a wonderful character who slowly begins to realize that growing up is harder than she thought it would be, that adults can have flaws, even your own parents, and things aren’t always as they seem.  What I Saw and How I Lied is the 2008 winner of the National Book Award for Young People’s Literature. Filled with period detail, well defined characters and an ending that is open to discussion, this book will keep you reading!
Grade: A