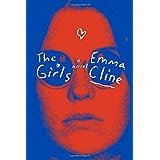 by Emma Cline
In the beginning of this chilling debut novel, Edie Boyd is a middle aged woman struggling with her life and house sitting for a friend who is out of town. When the friend\’s son shows up unexpectedly with his girlfriend, he says \”Your\’re that lady..,  she was in this cult.\”  So the story begins in flashback of Edie as a fourteen year old teenager in 1969.
Edie\’s parents have divorced and her self absorbed mother is too busy \”finding herself\” to pay attention to Edie.  After she has a falling out with her best friend, Edie finds herself alone and unsupervised. One afternoon she watches a group of older, free spirited girls dancing in the park. They are dirty and scantily clad but Edie is strangely attracted to  them. When she later sees them in a convenience store trying to shoplift,  she offers to steal for them but instead pays for the items. The girls want to take Edie to the \”ranch\” to meet Russell so he can thank her.  After traveling in a broken down vehicle they arrive at the commune where a rag tag group of people (mostly girls) and children live. Russell, their charismatic, manipulative leader, takes Edie into their fold and she begins to spend as much time with them as she can. Russell is a brilliant musician who is going to get a record deal, she is told.  Edie develops a crush on Suzanne, an older girl who seems to be a favorite with Russell.  Soon Edie is introduced to alcohol, drugs and sex and her infatuation with Suzanne grows to almost an obsession.
At times in this book, fourteen year old Edie seems to be squeamish about what is going on at the ranch.  They have to steal and forage in garbage cans for food, the children are running around dirty and unsupervised and the girls are jealous of each other when one of them is chosen to be with Russell for the night. But they have taken her in and she feels wanted and loved, so she pushes those thoughts aside.
When Mitch, the record producer, starts stalling about a record deal, Russell sends Suzanne and Edie to spend the night with him to try and convince him.  When Mitch finally refuses to make the record, the story takes a dangerous and violent turn.
The Girls goes back and forth between that summer and the present. We slowly find out what happened and why Edie didn\’t go to jail. This Manson type cult story is a familiar one and Cline does a good job of bringing the reader into the story. We can understand how Edie, a privileged, but neglected child could be seduced by these charismatic older girls. It is a sad story that probably happens all too often. The older Edie looks back with regret but her life has been changed forever by the events of that summer in 1969.

Thanks to NetGalley and  Random House for providing me with an ARC for a review.