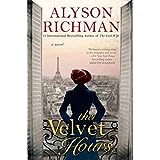 In 2010, an apartment in Paris was opened for the first time in seventy years. Solange Beaugiron, inherited the apartment from her grandmother Marthe de Florian. In 1942, as the Nazis were approaching Paris, Solange locked the door and fled Paris never to return again. When the apartment was opened in 2010 after her death, auctioneers found a time capsule of the Belle Epoque era showcasing Marthe de Florian\’s crystal, art, ceramic figurines and sumptuous furnishings. The most striking find was a portrait above the mantel of Marthe de Florian painted by a famous Italian painter. Love letters to Marthe from various wealthy suitors were also found wrapped in different colored ribbons.
Using this true story as her inspiration, Alysson Richman has crafted a beautiful story of  Solange, a young woman, who meets her grandmother for the first time when she is nineteen years old. She is grieving for the mother she recently lost and her father, not sure what to do with his daughter, introduces her to the mother that he only met when he was eighteen years old. He has had a tenuous relationship with his mother but, as rumors of war in Europe are swirling, and he is fearful that he will be called to serve,  he wants Solange to get to know her and have a safe haven. Solange is a budding writer and as she listens to her grandmother\’s  incredible life story, she begins to write it all down. Marthe rose from poverty to become an actress and courtesan, desired by important, wealthy men. She uses the beautiful objects in the apartment to tell her story to Solange: her collection of beautiful art and ceramics and a magnificent string of pearls with an emerald clasp that saved her from falling back into her previous life of poverty. Inside her lavish apartment, time has stopped and war seems very far away.
The plot alternates between the two stories of Marthe and Solangee.  Marthe is coming to the end of her life and Solange is just beginning her life with a new love but war will change everything. Descriptive and beautifully written, readers are transported into WWII Paris. Anyone who enjoys historical fiction will love The Velvet Hours.

Thanks to NetGalley and Berkley Publishing Group for providing me with a copy of this book for a fair review.