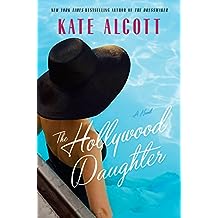 by Kate Alcott
The Hollywood Daughter is an interesting book. I love stories and gossip about \”Old Hollywood\” and this book had lots of references to that, but it focused heavily on the main character\’s obsession with Ingrid Bergman. Like everyone, I loved Casablanca but, beyond that, I wasn\’t really that enamored with Ingrid.  The story begins in 1958 where Jessica Malloy is living in New York and working at a boring job, while she submits her writing to various magazines, hoping she will get published. Out of the blue, she receives an invitation to attend the Academy Awards. Her best friend, who still lives in California, convinces her to come back home to attend the awards ceremony. She tells her that their old Catholic school, St. Ann\’s is being demolished and they must go and see it one last time. Jessica wants to do this, especially since Ingrid Bergman\’s movie, The Bells of St Mary\’s was partially filmed there. So, she  reluctantly agrees, and heads back to Beverly Hills to confront painful memories from the past.
Growing up, Jessica\’s father worked  as a publicist for David O. Selznick\’s studio and Ingrid Bergman was his main client. Jessie was obsessed with Ingrid. She and her best friend would pore over movie magazines trying to find gossip about Ingrid and other stars. When Ingrid becomes involved with Roberto Rosselini, leaves her husband and child and has a baby out of wedlock, everything falls aprt for Jessie and her family.
The Hollwood Daughter takes on  McCarthyism, the Catholic Church and how careers and lives were ruined by the \”Red Scare\” in Hollywood.  I liked lots of things about this coming of age story but the focus on Ingrid Bergman became tedious for me. But, I was curious to find out who sent Jessie the invitation to the Academy Awards and why, after so many years. I listened to the audio book narrated by Erin Spencer, and her narration was very good. If you enjoy stories set in 1940\’s and 1950\’s Hollywood you will probably find something to like in this book.
http://feeds.feedburner.com/LibraryGirlsGuideToBooks