This past weekend I indulged my love of classic Hollywood movies by watching three fun films with three classic stars of old Hollywood.

I have liked every movie that I have seen with Joan Crawford. She does seem to play a similar role in many of them and Harriet Craig was a good example of this.  Joan stars as Harriet, a strong woman who is married to a meek husband played by Wendell Corey. She runs all over him, treats her household staff like slaves and her cousin, who manages her schedule, like a servant.  Harriet seems to care more about her house and the possessions in it than she does her clueless husband. She lies about not being able to have children, breaks up her cousin’s romance with a nice guy and ruins her husband’s chance for a promotion because she doesn’t want to be left alone when he will have to go overseas for his job. All in all, Harriet is a pretty despicable person but she is so much fun to watch. (1950) 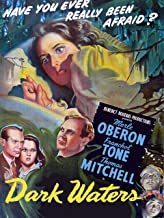 I had never seen a Merle Oberon movie  until I watched Dark Waters and I really liked this 1944 one.  Leslie Calvin wakes up in a hospital in the US after the ship she was on with her family was sunk by a German u-boat. She survived while she watched others die, including her family.  She has relatives in New York and the doctor treating her encourages her to write to them. She receives a letter from Louisiana from them and they agree to take her in. Still suffering from her trauma, she boards the train only to arrive and find that there is no one there to meet her. She collapses from the heat and a handsome doctor (Franchot Tone) takes her to their plantation.  Something is amiss when she arrives. Her nervous, flight aunt  says that they left New York because they were left the plantation and they want to restore it.  There are a couple of creepy men staying there and her uncle is  distant and always locked up in his room working on a book. Leslie begins hearing things but is she really or is it from the trauma she has suffered?   This black and white movie has lots of atmosphere and the bayou setting is perfect for this Gothic themed story.

This movie made in 1951 is another fun one with Bette Davis.  She stars with her then husband, Gary Merrill. Bette plays an English mystery writer who becomes trapped in her own lies. It involves a dead husband, or maybe not dead, a man who pretends to be her husband and a nosy neighbor who figures it out.  I don’t want to give away too much but it has a great twist at the end. Fun movie!

Yes I am and proud of it
It's been fun to have these two home for the holidays. #mylittlegirl #family
Puzzle in progress. It's a tough one! #jigsawpuzzle #OldBookStorepuzzle #difficult
We had a wonderful event today at the library. 27 local authors were represented. Loved meeting and chatting with them. I also bought some books! We have 60 authors who want to participate next year. #librarylove #writinglife
Librarian action figure. #librarylove #librarianactionfigure
New blog post. #trickortreat🎃 #scarymovies #nomorecandy #nothome Https://Funthings721992079.blog