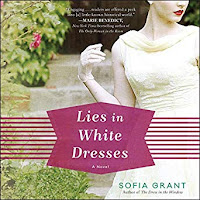 It was all a lie. Women were told that if they found a man and got married in a white dress they would have a wonderful life.  Francie Meeker and Vi Carothers know this lie all too well. In 1952 they are on a train to Reno, Nevada, for The Reno Cure.  Reno passed a law and all women had to do to get a quickie divorce was to stay for six weeks at one of the ranches set-up for women.  After six weeks of residency, they went to court and their divorces were finalized.
Francie and Vi, best friends and neighbors, never thought their lives would end up like this. They are both society matrons married to wealthy, successful men in San Francisco. They have lovely homes and children. Weren\’t they supposed to live happily ever after in this life they had chosen? But both women have secrets and one of  these secrets will change everything.
On the train to Reno the women meet Jane Samples, a young mother with her daughter. Jane has a secret, too. The older women take Jane under their wings when they notice her threadbare clothing and realize that she has very little money. Vi invites Jane and her daughter to move into her suite at the ranch.
At the ranch they meet Virgie Swanson, the daughter of the owner. Virgie  is a wannabe Nancy Drew who plans to be a detective when she grows up. Virgie is a delightful character who provides some humor in the book because she spies on the guests and decides that there are sinister things going on with them, even if there isn\’t.
The day after the women arrive at the ranch, tragedy strikes and the story takes a different turn. Lies in White Dresses has an interesting plot and I liked the main characters. It also introduced me to the Reno Cure, a part of history that I was unaware of. This historical novel also addresses some serious issues like abuse, both mental and physical, infidelity, homosexuality and death.
I listened to the audio version of this book and Nan McNamara was a wonderful narrator.  I really enjoyed this novel and plan to read more books written by Sofia Grant.
http://feeds.feedburner.com/LibraryGirlsGuideToBooks