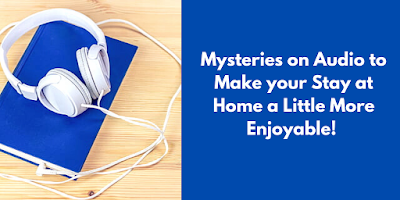 Audiobooks and mysteries are a great combination. During this difficult time, having someone read to us can be very soothing. It is also nice to listen while we are walking, cleaning, or doing other tasks while we are staying home.  Happy listening! 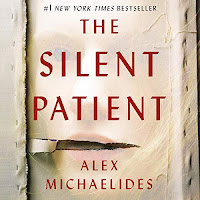 Alicia Berenson, a talented and famous painter, is in a mental institution for killing her fashion photographer husband, Gabriel. They seemed to have everything they could want with a beautiful home in London, success in their careers and a seemingly close relationship. But one night when Gabriel returned home from a fashion shoot, Alicia shot him multiple times. What would cause her to do this? No one knows because Alicia won\’t talk to anyone and has remained silent for over six years.
Theo Faber, a young psychoanalyst has been fascinated with Alicia\’s case for years. He thinks that he can help Alicia so he leaves a good job to apply for a job at The Grove, the psychiatric hospital where Alicia is being kept. Theo has his own problems and his obsession with Alicia may just be his undoing.

This psychological thriller will keep you reading. It has many layers, twists and turns with an unexpected ending. It is told through Alicia\’s diary entries, flashbacks and Theo\’s POV so the reader must pay attention to keep up with the story. The setting in a psychiatric center was interesting and the author said in an interview that at one time he worked in an institution like this and he also has a family member who is a psychiatrist. 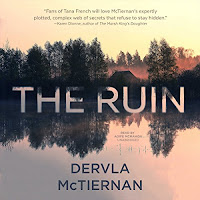 by Dervla McTiernan
When Cormac Reilly was a rookie Irish Garda he was called to what he thought was a domestic violence case. Instead he found two young children, Maude and Jack Blake, in a crumbling house with their alcoholic mother, Hilaria, dead in an upstairs bedroom with a needle in her arm.
Twenty years later and now a detective, Cormac moves with his partner, Emma, from Dublin to Galway and is dismayed to find that he has been assigned to cold cases. However, one cold case from twenty years ago, the death of Hilaria Blake, does interest him. The death had been labeled an accidental overdose, but new evidence suggests that it might have been murder. What happened to Maude and Jack Blake after their mother\’s death and why is this case being re-opened after twenty years? When another suspicious death occurs that is related to this old case, Cormac runs into a web of lies, family secrets and possible police corruption. The Ruin is part police procedural, part mystery thriller. It is dark, compelling, and totally engrossing.
Beating About the Bush
by M.C. Beaton 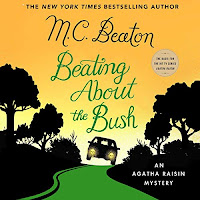 Agatha Raisin is a favorite with many readers and this 30th entry in the series is another enjoyable mystery.
In Beating About the Bush, Agatha and Toni are hired to investigate a case of possible industrial espionage. It doesn\’t take long for Agatha to figure out that there is a lot more going on with this case and their employer is hiding something. The Agatha Raisin Mysteries have always had a lot of fun characters and Agatha encounters new ones in this book including a bad-tempered donkey named Wizz-Wazz that takes the spotlight away from her.  Agatha\’s love life is always in turmoil and in this book, she is also fighting her growing feelings for Sir Charles, but Charles needs money to keep his estate going. He is engaged to an awful woman who has lots of money and she shows her true colors to Agatha. What is Agatha to do?
M. C. Beaton passed away after finishing Beating About the Bush, so this might be the final Agatha Raisin book. She left notes for another Agatha Raisin book so we can hope that Agatha will continue, even if someone else is writing the books. I hope so!
The Turn of the Key
by Ruth Ware 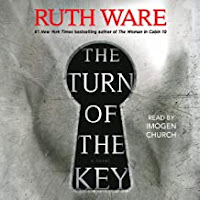 The Turn of the Key begins with Rowan Caine writing a letter to a solicitor she hopes will take her case. She is in jail for the death of a child and she is pleading for him to help her. The story continues with her letters telling the solicitor what happened and how she ended up in jail.
Rowan is a childcare worker in London looking for something else when she sees an ad for a job that catches her eye. It is for a live-in nanny to four children in the Scottish Highlands. The amount of money being offered is unbelievable, so Rowan sends in an application. She goes to Scotland for the interview and can\’t believe the luxurious, remodeled, Victorian house. The children seem to be a little bit undisciplined and she finds out that the parents are desperate to find another nanny because the last four have quit. Both parents are successful architects who travel for their jobs and they need a nanny right away. Rowan accepts the job and arrives when the parents are away working. The home is a \”smart\” home controlled by the Happy App and Rowan is on her own without any help except for the binder that the mother has left for her full of instructions about what the children can eat and other things.
The children are bratty and seem to resent her. She then hears that the people in the village think the house is haunted because a child died there many years ago. Weird things start happening, the Happy App malfunctions and Rowan begins to lose control of things. She does have a friend in the caretaker on the premises, but she isn\’t sure if he believes her when she tells him about all of the strange things that have been happening in the house.
Rowan isn\’t perfect and we find out that she has lied about some things to get the job, but did she murder a child? This twisty mystery has Gothic overtones and the ending was unexpected. Listen to it and see what you think.
Darling Rose Gold 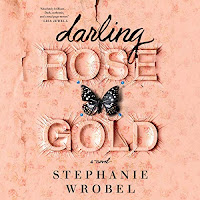 by  Stephanie Wrobel
Patty Watts is a wonderful mother, a pillar of the community and loved by everyone for the care she gives her only child, sickly Rose Gold. Patty is a healthcare provider and she knows what Rose Gold needs so if one doctor won\’t help her, she finds one who will. Rose Gold needs a feeding tube because she keeps vomiting and her teeth are rotten because of it. She is so weak and malnourished and needs a wheelchair. The town rallies around the family holding fundraisers and providing food and emotional support to Patty. For eighteen years mother and daughter are completely dependent on each other and Rose Gold is convinced that she is sick and that her doting mother is helping her. It turns out that Patty has been poisoning her only child.
Patty has spent the last five years in prison for what she did, but she is about to be released. She has nowhere to go and begs Rose Gold to take her in saying that all she has ever done is love her. The town is shocked when Rose Gold, with her infant son, picks her mother up at the prison and takes her home. However, she isn\’t taking her mother in out of the goodness of her heart. Rose Gold has her own plans because daughters never forgive.
This debut novel is a taut, twisted, psychological thriller told from both Patty and Rose Gold\’s points of view. There are many twists and turns and it is sometimes difficult to know who to believe, who was more twisted or what was going to happen. The ending is surprising.
The Dry
by Jane Harper 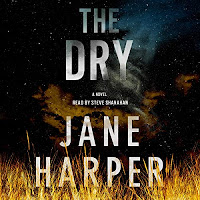 This debut novel by Jane Harper is a stunning page turner that puts you right into the Australian outback. Twenty years ago, when he was a teenager, Aaron Falk and his father left their hometown of Kiewarra under a cloud of suspicion. Now Aaron lives in Melbourne and is a federal agent. He receives a letter from the father of his best friend, Luke. In high school Luke and Aaron were inseparable but when a school friend, Ellie, died under suspicious circumstance, the people in the town thought that Aaron and Luke were involved. However, they both said that they were fishing together at the time of her death. Now Luke has apparently killed himself and his family. His infant daughter is the only survivor. Luke’s father’s note says that he knows Luke and Aaron lied and he demands that Aaron return home for the funeral.
So, Aaron goes back to his hometown where he is met with hostility by almost everyone in town. However, Luke’s mother begs Aaron to investigate Luke’s death because she said that he would never have killed his family. Reluctantly Aaron agrees to stay for a few days to see what he can find out. It does seem strange to him that everyone in the family was killed except for his daughter. Why would Luke kill all of them but let her survive?
The whole region is suffering from one of the worst droughts in history. Farms and other businesses are failing.  Against this backdrop of relentless heat Aaron uncovers lies, small town secrets and mean-spirited residents who want Aaron to leave Kiewarra at any cost.
This is the first book in the Aaron Falk series. This novel has a strong sense of place and the reader can feel the unrelenting heat and despair of the residents of Kiewarra. The author deftly weaves the details of the death of Ellie into the deaths of Luke and his family. There are red herrings and an unexpected ending. If you enjoy crime novels, The Dry is a must read!
http://feeds.feedburner.com/LibraryGirlsGuideToBooks